The Dutch infrastructure is built for cyclists and consists of a vast network of clearly marked cycle paths with smooth surfaces. But what are the cycling rules in the Netherlands?

Although there are separate signs and traffic lights for those on two wheels and almost everywhere are cycle paths, there are several rules that cyclists in the Netherlands must abide by. For example, the prejudice that those using pedal power have priority is not true.

The rules of the road in the Netherlands are easy to learn. There are general cycling rules, legal rules for you lights, priority rules, and important road signs for cyclists. Let's start with the general rules. It's wise to read these before you step on your bicycle.

•   If there is a bike lane, always use it.
•   Stay on the right side of the bike lane, pass other cyclist on the left.
•   If you are passing someone, ring your bell (tring, tring)!
•   Before turning left or right, extend your arm horizontally (left or right) to signal where you will go.
•   Two cyclists are allowed to bike side by side, no more.
•   Although there are separate traffic lights for cyclists, you have to stop for every red traffic light.
•   You are not allowed to cycle on sidewalks.

Besides official cycling rules, there a lot of do's and don'ts when you're on a bike. You will save yourself and others a lot of frustration by reading up on the Dutch road etiquette for cyclists.

There are legal rules for the lights on your bicycle. If you don't follow the rules, you could be fined. Before you hit the road, check if everything works. Especially in fall and winter, as it gets dark early in the evening! 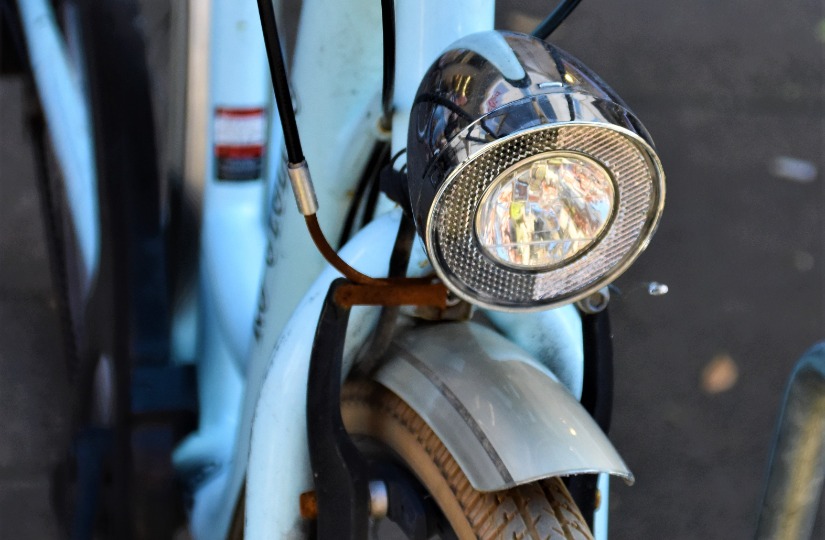 A fine for having no, or partially non-working, lights on your bicycle is €55.

Do you want to attach lights to your clothing? Then you can only attach them to the upper part of your body. Attaching lights to your head, arms, or legs is forbidden.

In the Netherlands, motorized traffic is often alert to cyclist around them. But that does not mean there are no rules regarding priority for cyclists. Quite the contrary.

•   At an equivalent intersection (without signs, shark-teeth marks, or traffic lights), you must give way to drivers coming from your right.
•   Trams always have priority.
•   If you turn left or right, you must give way to all straight-through road users (including pedestrians).
•   Priority vehicles with optical and sound signals (such as police, fire departments, and ambulances) always have priority.
•   Pedestrians on a crosswalk have right of way.
•   As a cyclist, when approaching roundabouts, you give way to drivers that are already on the roundabout. On the roundabout itself, you have priority. When leaving the roundabout, signal with your arm to the right.

There are a lot of road signs. If you want to get your car license, you need to know them all. Cyclists don't have to follow all the car traffic signs. There are special bicycle traffic signs that cyclists need to follow. These are the most important road signs in the Netherlands for cyclists.

If you don't follow the rules as a cyclist, you can be fined. Bicycle fines are expensive because it ensures the safety of traffic and of other road users. We give you a handy overview of the most common cyclist fines.